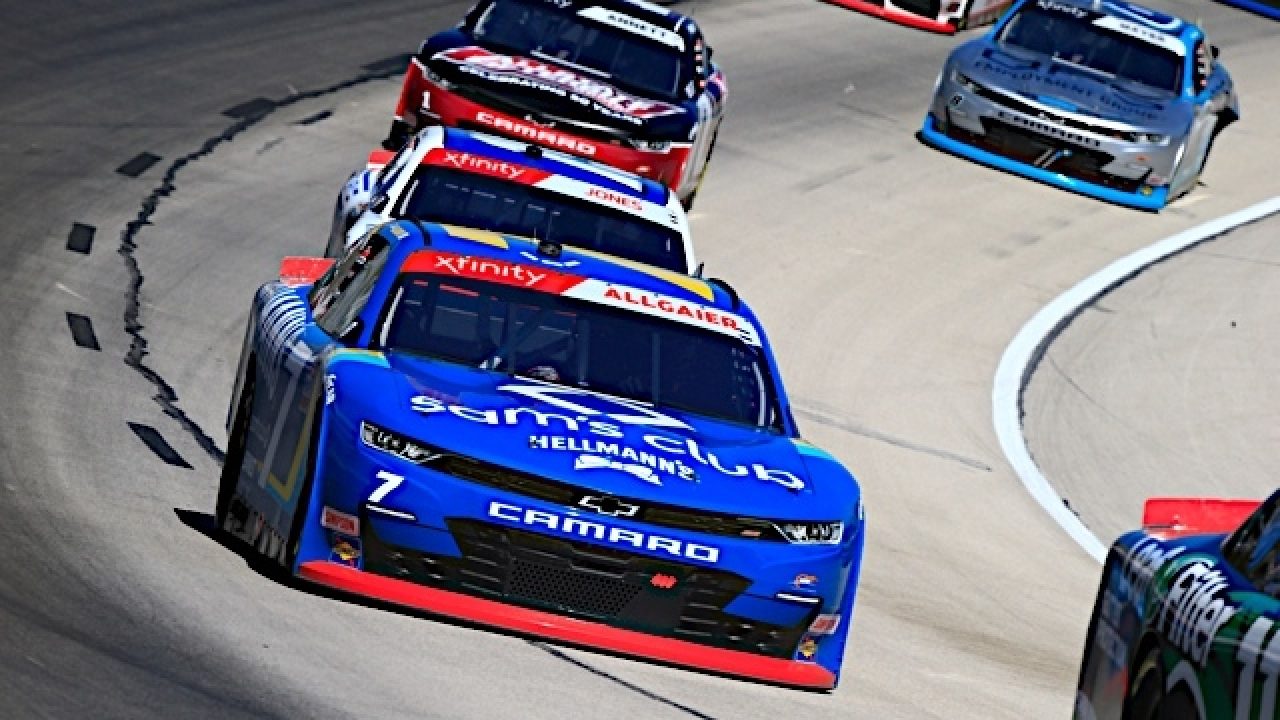 Justin Allgaier, driver of the No. 7 Sam’s Club #MakeOverMyBackyard Chevrolet, secured his ninth consecutive top-10 finish on Saturday afternoon in the NASCAR Xfinity Series event at Texas Motor Speedway, taking the checkered flag in the fourth position. The result marks the fifth time in the last six races that Allgaier has finished inside the top five. Additionally, with today’s top-five result, the JR Motorsports driver remains third in the NXS Playoff Grid, four points above the cutline with two races remaining in the Round of 8.

Allgaier lined up for the 200-lap event from the sixth position after the field was set via NASCAR’s mathematical formula earlier in the week. From the drop of the green flag Allgaier held steady, maintaining his track position inside the top 10 until the competition caution was displayed on lap 20. While under caution, Allgaier reported to crew chief Jason Burdett that the Sam’s Club Chevrolet was building tight while rolling through the corner. Although not handling to his liking, Allgaier continued to battle inside the top 10 once back under way, running as high as seventh before a caution with just six laps remaining in the opening stage provided Burdett an opportunity to work with some strategy. With a handful of the race leaders opting to come to pit road, Burdett made the call for Allgaier to stay out, moving the JRM driver up three positions and into the top five for the one-lap sprint to conclude Stage One.

Taking the green as the second car on the outside row, Allgaier traded positions with AJ Allmendinger and JRM teammate Michael Annett before taking the green-and-white checkered flag in the fourth position and earning seven extremely valuable stage points to begin the day.

During the stage-ending caution, Burdett called the driver of the Sam’s Club Chevrolet to pit road for four tires and an air-pressure adjustment. However, due to varying pit strategies, Allgaier returned to the track for the start of Stage Two in the 22nd position. Undeterred by the loss of track position, the Illinois native charged forward, improving nine positions to 13th in just three laps before a lap-54 caution period bunched the pack back together. Taking the lap-61 restart as the seventh car in the outside line, Allgaier quickly gained an additional three positions to 11th before the field was slowed once again by the caution flag on lap 63. The driver of the Sam’s Club Chevrolet continued his ascent up the leaderboard on the restart that followed, marching back into the top 10 over the green-flag run that followed to take the green-and-white checkered flag in the eighth position on lap 90. With the stage result, Allgaier earned an additional three valuable stage points to bring the No. 7 team’s total to 10 on the afternoon.

While under the stage-ending caution, Allgaier reported to Burdett that he needed help with the front turn on his Sam’s Club Chevrolet. As a result, Burdett called Allgaier to pit road for four tires and another round of adjustments. A strong stop by the Sam’s Club crew gained Allgaier three positions in the running order, sending the JRM driver back out for the start of the third and final stage on lap 97 in fifth. Holding the fifth position through a quick lap-99 caution period, Allgaier set his sights forward following the lap-108 restart, making a daring three-wide move down the back straightaway to power into the third position.

Now inside the top three, Allgaier remained steadfast, matching lap times with the top two throughout the 33-lap run that followed before the caution flag was displayed once again on lap 141. While under caution, Burdett called the driver of the Sam’s Club Chevrolet back to pit road for four fresh tires and fuel. Another strong stop sent the JRM driver back onto the track in the second position for the lap-149 restart. Firing off in second, Allgaier fended off a challenge from the inside line before settling into the runner-up position. Then, while narrowing the gap to the race leader through lapped traffic, an incident exiting Turn 2 forced NASCAR to again throw the caution flag on lap 172. As a result of the caution, Burdett made the call to bring Allgaier to pit road for the final set of fresh tires and fuel. However, with one car opting to stay out and an additional machine choosing to take just two tires, Allgaier returned to the track following the stop in fourth.

Taking the green flag from the second row on lap 180, Allgaier found himself mired in an intense battle for position with JRM teammate Noah Gragson, Harrison Burton and Austin Cindric. Trading positions with the trio for several laps, Allgaier was able to remain inside the top five throughout the closing laps to take the checkered flag in fourth.

The fourth-place result marks the fifth time in the previous six races that Allgaier has finished inside the top five and the 15th time in the last 17 races that he has placed in the top 10.

Additionally, today’s top-five finish keeps the JRM driver third in the NXS Playoff grid, four points above the cutline with two races remaining in the Round of 8.

“Today was a solid day for our Sam’s Club #MakeOverMyBackyard Chevrolet. We kept fighting all day long and were able to come away with another top-five finish and remain inside that top four in points. We know what we need to do from here as we get ready for next week in Kansas. Hopefully we can have another smooth day there and get ourselves one step closer to moving on to Phoenix.”